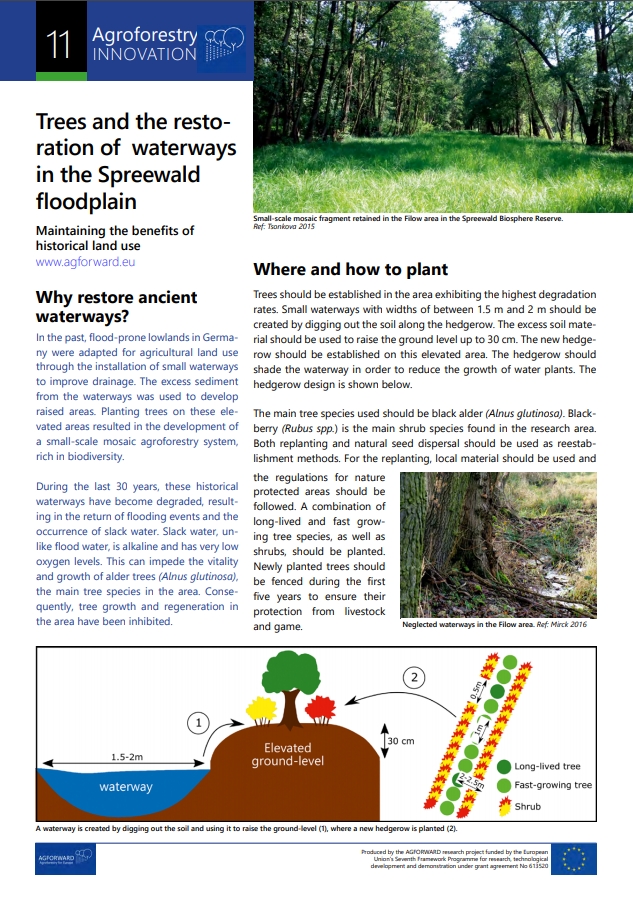 In this study, we aimed at comparing the response of the leaf phenology and the radial growth of two poplar clones highly resistant to pathogens and insects (type HES, High Environmental Sustainability), between an agroforestry alley-cropping system with wheat, and a specialized poplar grove.

The trial was carried out during 2020-21 at the “Sasse Rami” pilot farm of Veneto Agricoltura, located in Ceregnano (Rovigo, NE Italy). In the agroforestry system (AF), the poplar rows were NS oriented, and placed beside the drainage ditches, with 38 m apart rows and 6 m between trees (40 trees ha-1). The specialized poplar grove (C) had a 6×6 m block plantation (⁓290 trees ha-1). In each system, 4-year old poplar trees (Populus × euroamericana) of two clones with different leaf sprouting time, i.e., medium-late in Mella and early in Moncalvo were studied. In AF, two common wheats (Triticum aestivum L.) varieties, i.e., Arkeos (biscuit-making) and LG Ayrton (ordinary bread-making) were sown at the end of October 2020 and harvested on 29 June 2021.

Tree radial growth of both clones in the two systems was recorded (n=3) every 15 minutes by a datalogger CR1000 (Campbell Sci. Ltd) through 12 dendrometers (Linear Motion Potentiometer, Bourns-3048) installed at the end of February 2021 on poplar stems (1.30m above ground). Leaf phenological stages were monitored weekly using two phenological scales (Malossini, 1993; Finn et al., 2007). Wheat was sampled at harvest time at 3 different distances from the trees (+6 m, +12 m and +20 m), along perpendicular transects from the tree rows towards both east and west directions, to assess grain yield productivity.

At the 4th year of poplars growth, a periodic from 11th March 2021 to 29th August 2021 basal area increment of 98.3 cm2 in the control poplar grove (C) and 117.2 cm2 in the silvoarable system (AF) were recorded in the early foliation clone Moncalvo, while similar values, i.e. 99.8 cm2 and 100.1 cm2 were recorded in C and AF systems respectively for the medium-late foliation clone Mella. In AF, the periodical basal area increment was 17% higher in the clone Moncalvo as compared to Mella (p≤0.05). Leaf phenological development was faster in the specialized grove than in agroforestry (⁓1 week) in both the poplar clones. In the interaction zone with trees, i.e., +6m and +12m from the tree row, the grain yield of wheat was higher than in the centre of the inter-row (+20 m), i.e. by 13% and 4% for the varieties Arkeos and LG Ayrton, respectively, while, no significant differences were revealed between the two poplar clones.

Our findings suggest that poplars can be successfully integrated into alley-cropping systems, with expected higher growth in early foliation clones. There is high interest in the use of HES clones, they allowing for drastically reducing chemical treatments. Still a deeper assessment of suitable clones for agroforestry shall focus on those minimizing the impact on the herbaceous crops particularly in the last years of cycle. At this time, it is expected that up to the half of the expected poplar lifespan (⁓8 years), wheat takes advantage from tree proximity in terms of grain yield, highlighting the possibility to implement high-productive silvoarable systems, that might be further optimized after identifying the most suitable crop varieties.