Multi-functional hedgerows in the bocage systems of France 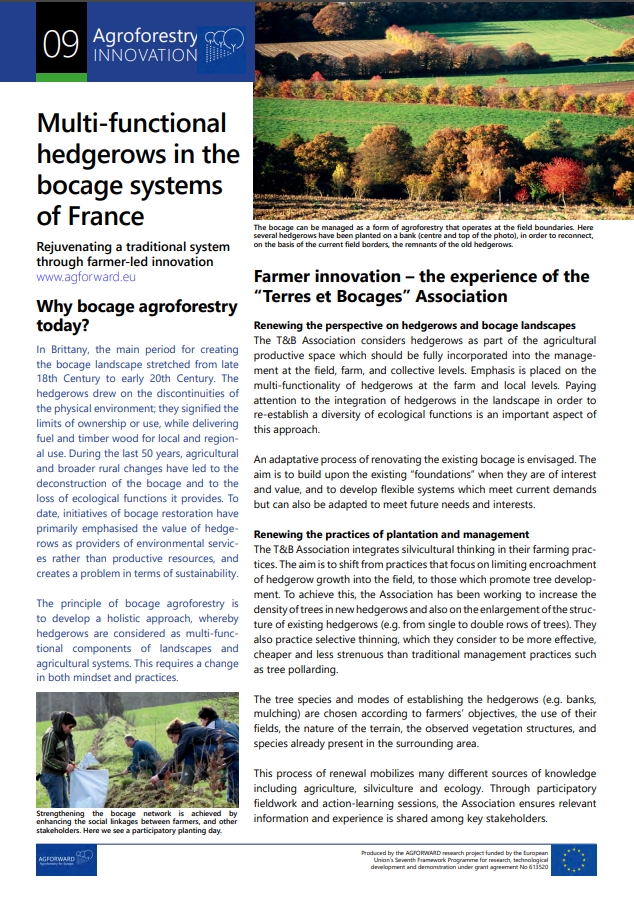 In Brittany, the main period for creating the bocage landscape stretched from late 18th Century to early 20th Century. The hedgerows drew on the discontinuities of limits of ownership or use, while delivering fuel and timber wood for local and regional use. During the last 50 years, agricultural and broader rural changes have led to the deconstruction of the bocage and to the loss of ecological functions it provides.

Is it a grail or an irrepressible passion, the fact remains that Cédric Coutellier is a vanilla expert on the Guadeloupean agricultural landscape. Whether he "marries" (fertilises) his pods under the cover of the high peaks of a Sainte-Rosienne national forest, or gives tours of his farm with great detail and education, Cédric follows the same course: to maintain local production and a refining technique that is unique in the world, in order to restore the black Mayan flower to its rightful place. A spice which, in the last century, was supplanted by cane and banana, almost succumbed to the imperatives of globalisation. But this was without counting on the convictions of certain die-hards. Among them, Cédric Coutellier, farmer and trainer, cultivates the singularity that makes the strength of a territory.

Of vanilla, he has chosen the exception: the vanillon, or Vanilla pompona, a variety for which Guadeloupe has long been the world's leading producer. This variety, with its low yields and precious, non-synthesizable aromas - unlike the vanillin in the classic vanilla planifolia (Bourbon vanilla) - is hunted down by the world's greatest gourmets - pastry chefs, master chocolatiers from Switzerland, Belgium, Guadeloupe and France. It is also tracked by perfumers who, like Guerlain, buy in Guadeloupe the vanilla that will make skin with the most delicate napes. Cédric Coutelier grows 10,000 vanilla plants sold under the Vanigwa brand.

Mostly planifolia pods, but also pompona, a nugget with a golden price, of which he cherishes four subspecies, for conservation purposes. "It reassures me", admits the farmer, who is aware of the current challenges of biodiversity. From Guadeloupe, he reproduces the art of refining vanilla: griffage. A traditional scarification method that replaces the usual scalding, or "Bourbon technique", practiced in the Indian Ocean. The aim is the same - to extract the water from the pod. But in Guadeloupe, the pod is scratched, not soaked in hot water. Revealed, condensed, the scarified vanilla is a raw metal that attracts, an addictive scent that subtly distinguishes it from the Malagasy vanillas on sale in the territory. Cédric's customers can't get enough of it. Among them, Guillaume Gomez, chef at the Elysée Palace, Jacques Genin, a chocolate founder based in Paris, or the restaurant l'Escale, in Sainte-Rose. In Montreal, his fans are the spice hunters Epices De Cru, or Éric Goeury (Les Co'Pains d'Abord), an artisan baker and pastry chef who incorporates this exceptional vanilla into panettones sold for 60€ each.

In 2017, Cédric Coutellier's work was recognised: he won the national Talents Gourmands competition.

Growing in the forest

The setting where Cédric grows his orchid flowers is also exceptional. It is in the heart of the tropical rainforest, at the foot of giant mahogany trees, that Cédric's vanilla grows, bathed in natural light, nourished by original humus, respecting natural biogeochemical cycles. Gone are the greenhouses, the neon lights, the vines on a drip fed with various chemical cocktails. A priesthood? "On the contrary! "says the farmer and president of APAGWA (Association for the promotion of Guadeloupean agroforestry). "The more I leave the plant in its natural environment, the less I intervene! "Embracing the trees, Cédric's vines are only looped (brought to the ground) and fertilised. Cédric Coutellier works in partnership with the Office National des Forêts (ONF), which entrusts him with the management of 5 hectares of forest - a specification that implies a culture with minimal environmental impact. The result is the ONF tropical agroforestry label, which is "stricter than organic! "says the farmer with satisfaction. His vanilla has had the AB label since 2012 and the "Guadeloupe National Park Spirit" label since 2017. Sustainable agriculture It is therefore not surprising to find Cédric Coutellier in front of trainees - professionals in transition or farmers who want to adopt gentle cultivation practices - to whom he teaches sustainable agriculture.

An agrobiologist and a qualified agroforestry trainer, the Sainte-Rosien demonstrates that agriculture can be integrated into ecosystems without damaging their natural functioning. As a trainer and partner of the ONF, Cédric is taking part in an unprecedented dynamic: developing farming in the forest. "It's a win-win situation. "he explains. "Farmers create an activity or increase their income by setting up in the forest in natural clearings. In return, they maintain their plot of land while respecting the forest ecosystem. "In Guadeloupe, the ONF has around thirty concessionaires who grow cocoa, coffee, roucou, pepper or cut flowers. "Indc the forest, I recharge my batteries. I like working there, disconnected. Rather than spraying plant protection products from above, I like to work in the forest.