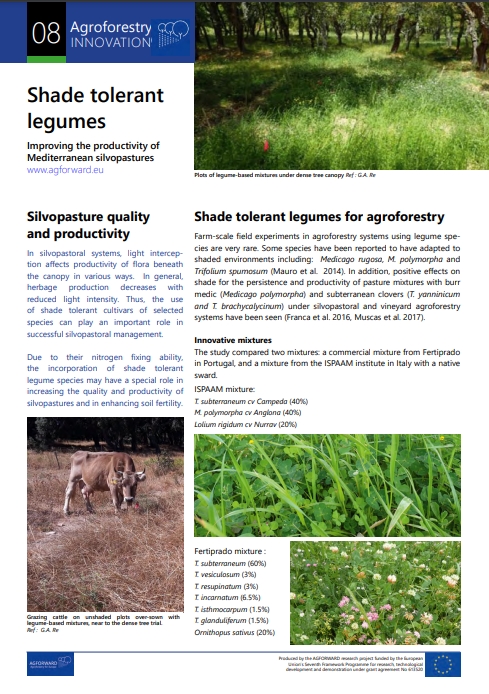 In silvopastoral systems, light interception affects productivity of flora beneath the canopy in various ways. In general, herbage production decreases with reduced light intensity. Thus, the use of shade tolerant cultivars of selected species can play an important role in successful silvopastoral management.

Due to their nitrogen fixing ability, the incorporation of shade tolerant legume species may have a special role in increasing the quality and productivity of silvopastures and in enhancing soil fertility.

Missed chance for the Federal Council of Germany: opportunity for effective agroforestry promotion not taken

German Bundesrat agrees on agroforestry in Germany. But, besides prominent consideration of agroforestry in the new EC CAP, mentioning in the Green Deal, the Biodiversity Strategy, and Farm-to-Fork strategy and even more with Cem Özdemir as current green party agricultural minister of Germany, politics does not dare to come out of hiding.

Despite this very welcome development in general, there is reason for scepticism by the German Agroforestry Association (DeFAF) as to whether agroforestry systems will actually be implemented to a greater extent in agricultural practice. This is mainly due to some framework conditions laid down in the CAP Direct Payments Regulation:

The CAP Direct Payments Regulation was now confirmed in the Bundesrat on 17 December 2021. Beforehand, DeFAF e.V. had campaigned for the federal states to table various amendments in order to improve the framework conditions at the last minute, so to speak. Some suggestions were actually taken into account in amendments and supported by the Bundesrat committees for agricultural policy and consumer protection as well as for the environment, nature conservation and nuclear safety. Despite the committees' recommendations, important amendments, such as at least a slight increase in the subsidy rate or a reduction in the minimum distance, were not approved. From the point of view of DeFAF and EURAF, a great opportunity for more climate protection, climate adaptation, soil protection and structural diversity in agriculture was thus missed, because it must be assumed that the promotion of agroforestry systems as an organic scheme will not be accepted.

A small ray of hope is paragraph 5 of the resolution on the CAP Direct Payments Regulation, also adopted by the Bundesrat on 17 December 2021. According to this, the regulations for the ecoscheme "Retention of agroforestry systems" are to be adjusted quickly if it becomes apparent that it will not be applied to the extent planned. Why the framework conditions are not optimised from the outset in the sense of increased implementation and management of agroforestry systems is not clear.

Clearly, this resolution provides a basis for the work of the coming years. EURAF will stand aside in the future to support DeFAF in its cumbersome work, as it does with any other national association in Europe.

So please, fellow agroforesters of Europe, keep up the good work!