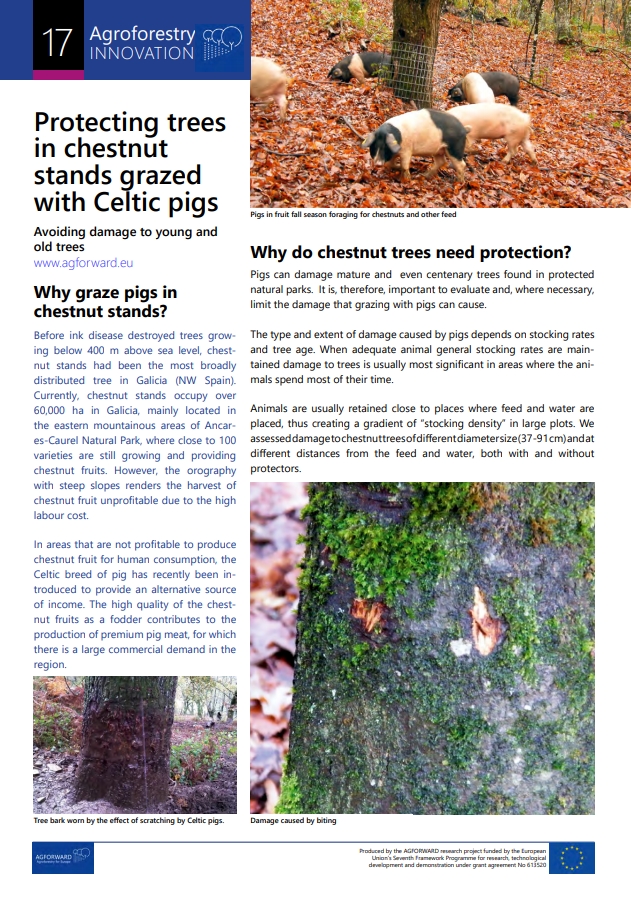 Agroforestry on contour swales in Flanders: Venturing into Aquaculture? (Belgium)

On the hillside of the Rodeberg in Westouter the organic cattle farmer Rik Delhaye started establishing swales on his pasture land. Swales combine an on-contour ditch with a downslope berm. On the ditches he installs a polyculture system consisting of different storeys, from vegetables to berries to high-stem fruit trees.

The swales reduce erosion to zero: the landscape can rehydrate again and nutrients stay on the land. The water retention capacity on the landscape increases which enables venturing into land-based aquaculture. 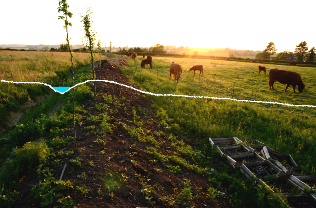 Swale or ditch-berm structure in Heuvelland, Flanders established in late spring 2014 on a pasture, with high-stem apple trees and understory of strawberries. Photo: Wervel.be CC BY-NC-ND 2.0

Step one: create farmland out of thin air

For a swale to function properly, the berm needs to be uncompacted. So how does one go about building a swale? Any earth-moving tool will do: a bulldozer with a loading bucket (aka drott), a spade, or anything in between. First, get exact measures of the site’s contours using a laser/dumpy level or a simple A-frame. Then demarcate them with pegs or a lime line. You’re ready to dig.

First benefit: the ditch-berm structure act as a crease that slightly enlarges the area of the field. Congratulations! You’ve just created farmland out of nothing.

On sloping land, agriculture often leads to erosion. Soil particles and nutrients are washed downslope by the power of the water running unconstrained off the hill. The consequences are dire: groundwater levels, starved of infiltration, drop, while rivers, overloaded by the resulting floods, escape their banks. Roads become slippery with mud, drains clogged with silt. Valuable topsoil, sometimes charged with toxic phytosanitary products, disappears. And climate change won’t help: more frequent floods and droughts are to be expected.

Degrading fields, drying out, producing ever less food. Polluted rivers. Flooded towns. Is that the future? Thankfully, it doesn’t need to be that way. The low-tech swale can be part of the answer.

During heavy rainfall, excess water will accumulate in the ditch and immediately start infiltrating the berm. This recharges groundwater, helping plants withstand longer periods of drought. It means less water in the rivers, so fewer floods. And it stops erosion in its tracks: any topsoil carried off by a downpour is trapped by the swale’s ditch and deposited there. When water is seen as a resource, it becomes obvious that it should flow as slowly as possible through the landscape.

The berm you’ve built must be of loose soil, ideally with the original topsoil placed on top, to increase drainage - and rooting. That berm becomes a perfect habitat for a great variety of annual and perennial crops. Key will be trees. They anchor the berm, and act like a free water pump: their roots facilitate the infiltration of water during rainfall and lift it up hydraulically during dry periods, to the benefit of anything else growing on that berm. Use that favourable environment by planting vegetables, herbs or berries between them. Increase your income by choosing half- or high stem fruit trees. One tip: start cultivating your berm with a leguminous crop. It’ll suppress weeds and build up humus.

After some years, your swales will have recharged so much groundwater that you can go for the next step: aquaculture! Dig a few ponds in low-lying areas. Fed by the swale infrastructure, they will remain permanently filled with water - a great (and free!) drinking water source for grazing animals.  Now that you’re getting the hang of things, you can become more ambitious.

Those swale ditches don’t just capture water, but also topsoil and nutrients, thanks to which a whole host of microscopic creatures soon colonize the water. If you feed that water to your ponds, add some crayfish. They’ll love it. (This was common practice for centuries, as the picture on the right attests). You can aim higher: move up the aquatic food chain and put carp or even zander into your ponds. The result will be a farm that has diversified away from a single crop and now produces fruit, meat and fish in addition to its main crop. That means extra income - and a buffer against swinging commodity prices.

Because they are biodiverse lines in monotonous fields, your swales will naturally act like newly created nature corridors. Expect more pest-eating birds, pollinating insects… and nature-loving tourists, who will be ripe to buy some of your farms’ local production. And from fruits to crayfish to meat, you’ll have something to satisfy every palate. 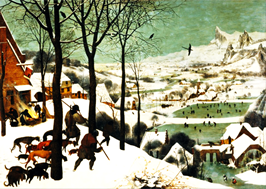 Crayfish, carp and other fish have been raised in Flemish village ponds for centuries. (Huntres in the snow, Pieter Bruegel, 1565)