Walnut and cherry trees with cereals in Greece 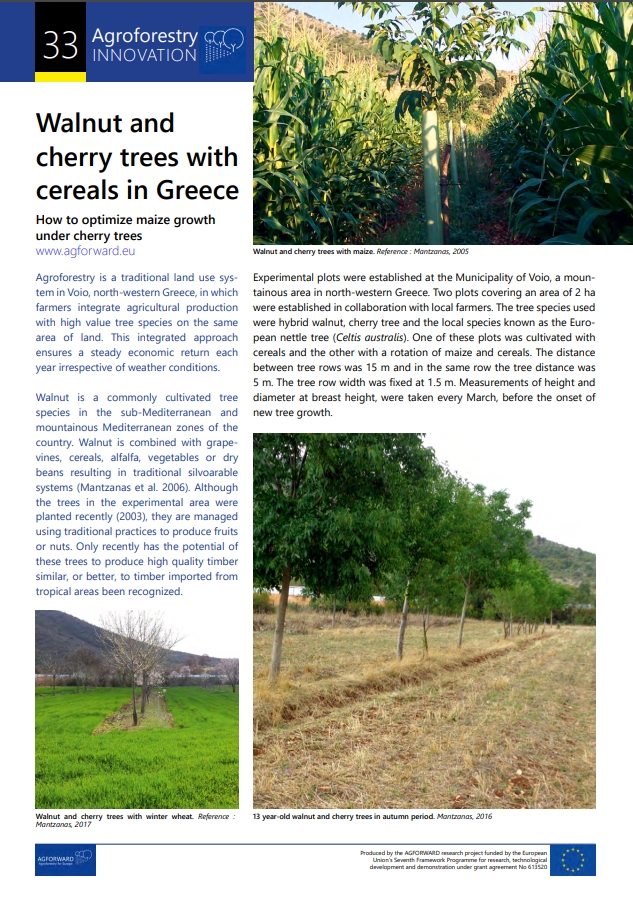 How to optimize maize growth under cherry trees

Agroforestry is a traditional land use system in Voio, north-western Greece, in which farmers integrate agricultural production with high value tree species on the same area of land. This integrated approach ensures a steady economic return each year irrespective of weather conditions. 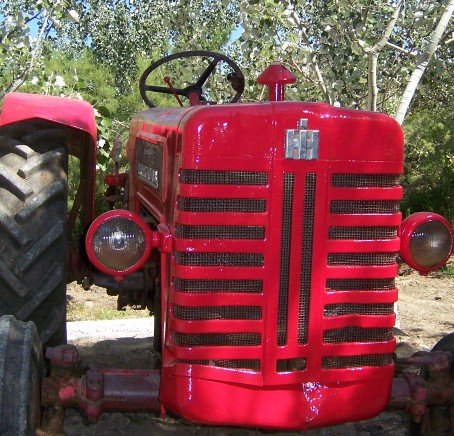 On the 5th and 6th June, 50 delegates attended the annual meeting of the UK's agroforestry association, the Farm Woodland Forum, hosted by the Chair, Mike Strachan, and treasurer, John Holland, at SNH Battleby, near Perth in Scotland. The first day was packed full of interesting presentations covering a wide range of topics on the theme of 'Integrating Farming and Forestry'. The presentations will be available on the FWF website here.

Roger was born on the farm, although he left home at 18 and only returned in 2011. As he was effectively starting from scratch at that time he decided on a policy of trying to make a complete product (or products) on site.

Initially, Roger’s idea was to grow spring barley, malt it and produce a beer in a craft brewery. However, he could not get funding for this. Newburgh is famous for heritage apples, and as Roger had read about Stephen Briggs’ apple system in Cambridgeshire he decided to plant heritage apple varieties instead.

Overall Roger has planted nearly 10,000 native broadleaf trees on the farm, of which 750 are apples in an alley-cropping system. These account for 5% of the area of the field in which they are grown.

The varieties were partly chosen to ripen after the harvest of barley that is grown in the alleys between the tree rows, and to be picked by hand. This required chosing a rootstock that would not make the trees too tall. The field chosen has 10 rows of apple trees, each grown in a 3 m strip of grass floristically enhanced with a ‘pollen and nectar’ seed mix and with arable alleys of 24 m.

Unlike Stephen Briggs’ farm, Parkhill Farm is not organic, so this allows the spayer in to the alleys (although Roger pointed out that the outer nozzles are always turned off when spraying herbicides next to the trees, to minimise risk from spray drift). The tree rows are orientated north-south, so ploughing occurs in the same direction although previously the field had always been ploughed east-west (up and down the slope). This year Roger tried no-till in the alleys. The alleys are sown with a 3 m drill.

The crops grown in the alleys have been grain crops (barley last year).

However, the next rotation is going be be grass for hay, followed by barley for a few years, peas, wheat, then barley again. Perhaps when the trees are taller sheep will be introduced.

As well as tillage, harvesting and spraying, the plot requires pruning of the trees. This is normally carried out in March, but this year only the 3 western rows were pruned. This will make pruning difficult in subsequent years as the mesh tree shelters have to be lifted up to prune and any side branches left from this year will catch in the mesh.

The main pest problems have been winter moth (Operophtera brumata L.) and roe deer. The most problematic weeds have been docks, thistles and mares’ tails. These are normally strimmed in the tree rows, but that has not yet happened this year. Although the farm is not organic, the apples have less disease risk than if grown in an orchard as the wind goes through the rows more easily (although yields are lower than in an orchard). The intention is that when the trees are large enough for an apple harvest the farm will produce cider.

The trees were funded by the Woodland Trust, with the farm providing tubes and labour. The planting of the tree rows with a pollen and nectar mix came about through Environmental Focus Area funding (originally designed for field margins, but allowable once the area covered by all the tree tubes was taken out of the total area claimed for).

The apple field, along with other parts of the farm, is the site of an annual mountain bike festival in summer, with participants racing through the ripening barley and the apple trees.

The party headed uphill through the farm on the Fife Coastal Path. We were shown a mixed wood of sycamore, larch and other species that was planted by Roger’s great grandfather. Some of the original larch have been cut for fence posts. It can be used for grazing under the Basic Payment Scheme, and sheep seem to like it. The woodland was noticeably cooler than the open fields. Currently 30,000 ha like this woodland are receiving BPS payments in Scotland. However, there is no requirement for management so many of these woodlands are degraded. Additional payments are given in funding schemes that include a grazing management scheme in the application.

The new tree planting on the farm aims to link the existing woodland, and make a corridor all the way down the hillside to the River Tay. These new trees are in fenced strips, and when the last of the 10,000 trees are planted this year, and those trees have grown, the existing wood we were shown will be fenced and managed more effectively to allow regeneration.

Rachel gave us a tour of the farm woodland, planted 20 years ago on the poorer, sloping, north-facing soil of her parents’ 140 acre (57 ha) farm bordering the River Tay. The woodland is good for woodland birds, and the farm as a whole also hosts lapwings, oystercatchers and redshank.

Current there are 63 acres of arable land farmed by a neighbour. There have been some new hedge plantings with willow, hawthorn and crab apple, and planting of trees to shelter the farm from a neighbour’s chicken sheds is planned.

The rest of the farm is occupied by the woodland of sycamore, ash, cherry and oak. There is also blackthorn present, spreading up from the river bank. The woodland was planted under a grant scheme that did not allow for any tree management for 30 years. Because of this restriction many of the trees, particularly the oaks and cherries, have very poor form for timber. The cherry, in particular, has abundant productivity that has been wasted by the poor state of the trees. The ash has been subjected to a devastating outbreak of ash dieback. The ground flora is dominated by perennial grasses, nettle and hogweed. There are very few woodland species in the ground flora.

The delegates toured the wood, and we then had a discussion about possible management options. It was agreed that the trees are too dense in many places, because of the restrictions on tree management for 30 years, and the wood lacks energy. The outbreak of ash dieback has also had a major impact on one of the species.

The first consideration is that the ash should be removed. This could be sold off as firewood, either by selling the rights to it to a contractor or hiring a contractor and marketing bagged firewood on-farm. Any trees apparently unaffected by ash dieback should be left, as these may be resistant. The open space left where clumps of ash are removed does not necessarily have to be replanted with other species, although if it is replanted birch would be a possibility or cherry if it can be pruned. Sycamore plus aspen is regarded as an ecologically suitable replacement for ash. It was acknowledged that sycamore can present problems as it so readily sets seed, but is currently a well-regarded timber species. It would be sensible to fence off areas where any replanting is to occur, to allow for grazing in the rest of the wood, and the ash cut down could be used to provide fence posts for this. Replanting does not have to be in rows, but could be in clumps.

A few of the oaks will eventually make good timber, so consideration should be given to remedial pruning and removing trees round the good examples when the terms of the planting grant allow.

Grazing of the woodland is a desirable option, although more light should be allowed in to the denser areas. Hardy cattle would be a better option for this than sheep. Horses should not be considered. Small enclosures should be made in order to move the livestock round the wood, and this could be achieved with builders’ netting and posts from on-farm timber. Alternatively, electric fencing is very effective. It would be worth investing in semi-permanent posts, round screw-in clips so the electrified tape can be moved easily and a solar power supply. This can be done in-house, or if the grazing is rented out it can be left to the tenants. Current grant schemes in Scotland are not very helpful for woodland grazing, but Mike Strachan pointed out that there are so many woods planted about 20 years ago that it would be worth re-designing some of the schemes to allow for this.