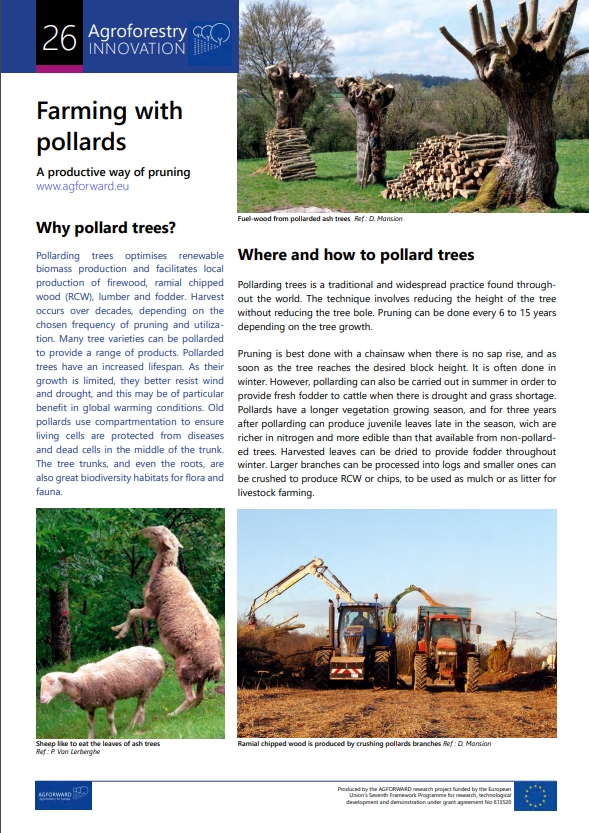 Silvopastoral Agroforestry System on the farm Eichhof, Schleswig-Holstein, Germany
The Riecken family is converting their dairy farm Eichhof in northern Germany to a silvopastoral agroforestry farm. Felix and his sister Sina Riecken, young farmers of just 26 and 28 years, see agroforestry as an appropriate way to solve burning problems of the world, such as the acute danger of climate change.

The Biolandhof Braun is a much-diversified organic farm with 58 ha of arable land, 17 ha of permanent grassland and some forest. In 1988, the conversion to organic farming took place with the aim of respecting and preserving the environment and resources as well as creation. The interest in closing nutrient cycles lead him via forest garden systems and permaculture to agroforestry.

The hens have much more space than the regulations of organic farming require. (Photo: C. Böhm)

In addition to grain cultivation for organic seed production, 22 dairy cattle, some pigs and, most recently, chickens are kept in the agroforestry system. The farmer experiments with two chicken breeds. Bress chickens (Les Bleus) are raised as a dual-purpose breed. Characteristic features are the snow-white plumage, the blue legs and the red comb, symbolizing le drapeau tricolore. The laying hens are New Hampshire, a robust breed with good laying performance, which is widespread in organic farming. The chickens can use the agroforestry system on grassland on the one hand and the orchard meadows on the other. The milk is processed in the farm's own cheese dairy and the daughter Johanna runs an excellent restaurant in the restored former cowshed.

Each stable accommodates 20 cocks together with 200 hens. The Swiss "chicken pope" Willi Baumann helped in planning the two stables. The stables consist of an interior and an exterior aviary. This is closed at night and contains the feeding places as well as a scratch box. The stalls are almost exclusively made of wood and the construction can be taken outside for manure removal via a large side gate. An 80 cm high wall surrounds the concrete floor. The stables provide enough warmth in the winter without heating. In order to enhance the aesthetics of the new stables, several rows of Silphie (Silphium perfoliatum) – a rich-flowering plant originating in North America – were planted in the surrounding area.

Additional feeding is carried out with a mixture of cereals and legumes and skimmed milk from cheese production.

To get accustomed, the chickens should first spend a few days with their doors closed. The chickens, who initially spent the night in the laying nests, were carefully moved so that they also got used to the perches. 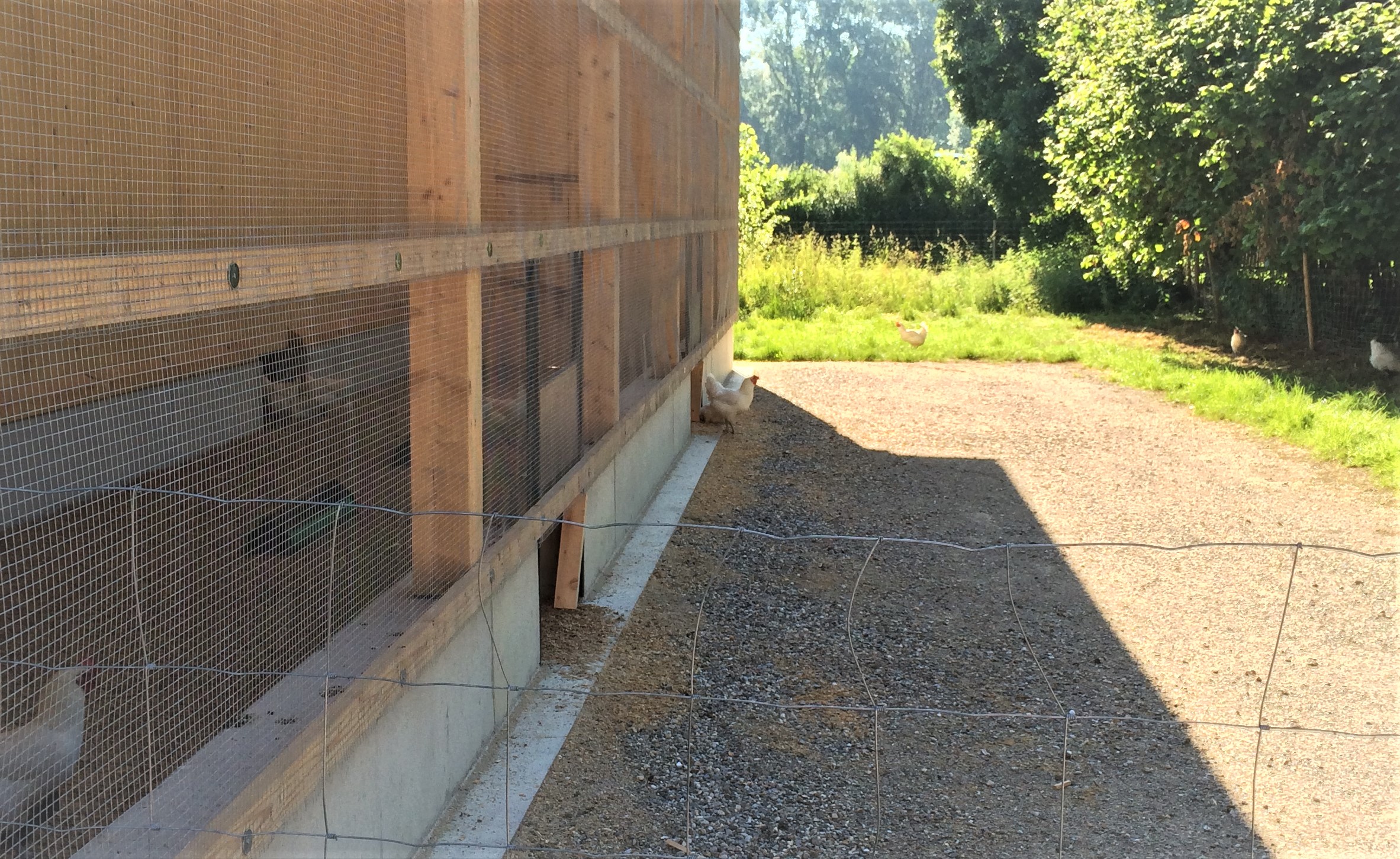 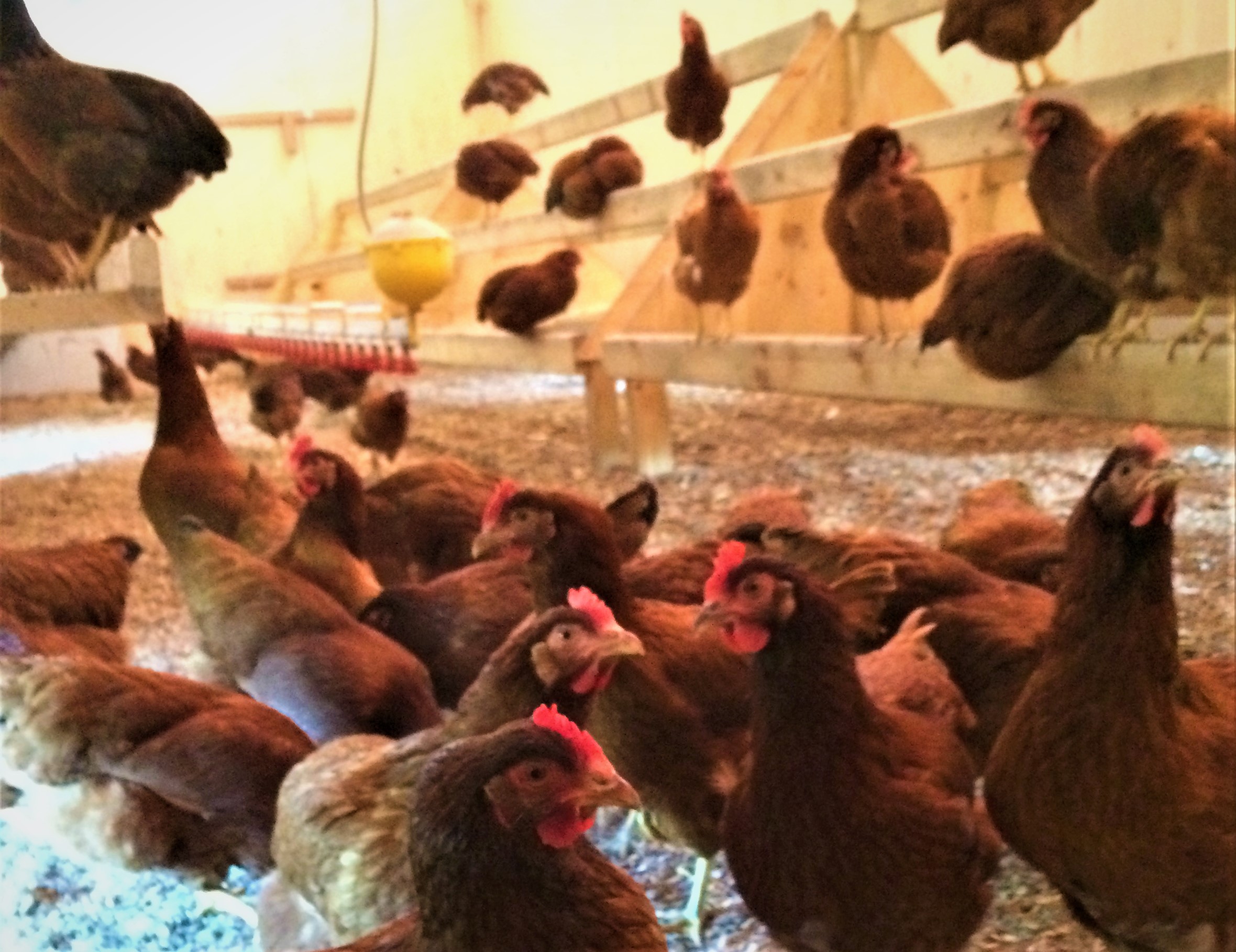 Exterior and interior view of the newly erected chicken stables. In the picture the perches for the night and the drinking system. Already after 14 days the chickens have settled in very well and come back independently at night. (Photo: R. Hübner)

Notes on the agroforestry system

Up to date, about 25,000 trees have been planted. In 2009 and 2010, poplar clones, grey-black alder and silver willow were planted as part of a cooperation project between the Bavarian State Institute for Agriculture (LfL) and the Bavarian State Institute for Forestry (LWF). The first energy wood was harvested in the winter of 2015/2016. In 2011 and 2012, poplar hybrids, grey alder and a willow mixture were planted additionally. It is currently planned to let these grow for another 7 to 10 years.

The farmer is a proponent of compostable plant foils made from maize starch, as these are irreplaceable in terms of labor economics for the suppression of weeds when agroforestry areas are established. The foils are 1.25 m wide, 1,000 m long and cost approx. 200 €, the positioning is easy and a small trench is made on both sides to cover the foils. Under certain circumstances, experience from northern Germany has shown that the suitability for dry locations is lower. The trees are successively harvested manually in winter.

After drying, the wood chips are first sieved, as a high proportion of fines leads to increased maintenance work on the wood gasifier. The resulting fine material serves as bedding for the henhouses. The cleaned wood chips are temporarily stored in the hall and used to heat the wood gasifier with connected Combined Heat and Power (CHP output 30 kW). The resulting heat is stored in a large water buffer tank of 86 m³ and retrieved for various purposes at the farm. The electrical energy is partly used by the owners and mainly fed into the grid.

Notes on arable and forage production

The farmer swears that the composition of the green fodder is decisive for the quality and quantity of the milk. In order not to reduce the content of fine-grained fodder plants and herbs by turning them three times during hay advertising, the bales are collected in a semi-dry state. The final drying takes place without mechanical influences on the farm. Thus, the grass bales are dried via a ventilated slatted floor with the heat from the rear ventilation of the photovoltaic system together with stored heat from the buffer tank. A positive side effect is the cooling of the photovoltaic modules, as heat accumulation in summer limits the output. The thermal output called up is 500 kW.

The milk yield on the farm is solely due to the good quality of the fodder or its preparation. The cultivation of alfalfa should be pursued more intensively again in Germany and further developed in terms of breeding and agricultural technology. It has been shown that alfalfa has a higher proportion of essential amino acids by a factor of four compared to soy. According to the farmer's experience, legumes such as vetch and clover should generally find their way back into the ration. In the past, for example, the so-called Landsberg mixture (a mix of vetch-clover-German-ryegrass) was widespread.

Hay bales on the drying floor. The practice of double row planting is now outdated. It can be seen that the weaker shoot clearly lagged behind in development. (Photos: R. Hübner)

Positive effects due to the use of agroforestry systems can be expected, for example, from an increased occurrence of birds in the landscape.

The cow feels very comfortable as a forest and steppe animal in agroforestry systems. The strips of wood offer shade and protect against bad weather. The cows like to linger in the shade of the trees to ruminate. Healing effects such as the salicylic acid of willow leaves are instinctively used by the cow "when she has a headache". In addition, agroforestry systems improve the microclimate. The farmer was able to observe, for example, that in the wake of global warming and ozone pollution, cows are increasingly less likely to go outside during the day. This development is worrying from the farmer's point of view.

At the experimental plots of the Bavarian State Research Institute for Agriculture (LfL), poplar yields are a spectacular 20 t dry weight/ha*yr for the varieties Max 3 and Max 1. These yields make colleagues from drier regions of Germany very jealous. However, it should be borne in mind that in the Munich gravel plain and the Freising Moss there is a direct groundwater connection in addition to high-yield soils.

So far, about 25,000 trees have been planted, including poplar hybrids, grey alders and a willow mixture. However, the tree diversity within agroforestry systems should be increased in the future so that not only poplar, alder and willow are planted. Positive effects between different species can thus be maximized. Positive effects also emanate from the agricultural wood strips on the surrounding main crops.

The farmers’ particular concern is to counteract the comprehensive separation of scientific disciplines with practical examples. This, coupled with a great willingness to experiment, is reflected in the fact that generations of students from local Technical University of Munich (TUM) and Weihenstephan-Triesdorf University of Applied Sciences (HSWT) and the Bavarian State Institute of Agriculture (LfL) are regularly allowed to carry out experiments on the farm.